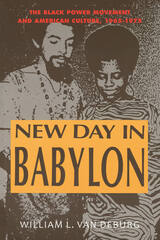 The most comprehensive account available of the rise and fall of the Black Power Movement and of its dramatic transformation of both African-American and larger American culture. With a gift for storytelling and an ear for street talk, William Van Deburg chronicles a decade of deep change, from the armed struggles of the Black Panther party to the cultural nationalism of artists and writers creating a new aesthetic. Van Deburg contends that although its tactical gains were sometimes short-lived, the Black Power movement did succeed in making a revolution—one in culture and consciousness—that has changed the context of race in America.

"New Day in Babylon is an extremely intelligent synthesis, a densely textured evocation of one of American history's most revolutionary transformations in ethnic group consciousness."—Bob Blauner, New York Times