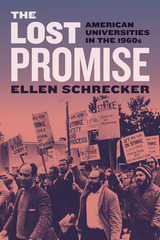 The Lost Promise is a magisterial examination of the turmoil that rocked American universities in the 1960s, with a unique focus on the complex roles played by professors as well as students.

The Free Speech Movement at Berkeley, armed Black protestors at Cornell’s Willard Straight Hall, the horrific National Guard shootings at Kent State—these are familiar images of American college campuses in the 1960s and early 1970s. But behind the well-known student revolutions, there are untold stories, about both what led to those turbulent times and how they continue to define the university today. With The Lost Promise, Ellen Schrecker—our foremost historian of the McCarthy era—delivers a far-reaching examination of American higher education’s most tumultuous decade, exploring how universities shaped the 1960s and how the times in turn shaped them.

The 1950s through the early 1970s are widely seen as the academy’s golden age, when universities—well funded and viewed as essential for national security, economic growth, and social mobility—embraced an egalitarian mission. Swelling in size, academia attracted new types of students and professors, including radicals who challenged its traditional mode of operations. Schrecker illuminates how that explosive growth intersected with the turmoil of the 1960s to create an unprecedented crisis where dissent over racial inequality and the Vietnam War erupted into direct action. Torn by internal power struggles and demonized by conservative voices, universities never fully recovered, especially after the economic crunch of the 1970s, resulting in decades of underfunding and today’s woefully inequitable system.
​
Books about specific aspects of the academic community’s experiences in the 1960s abound, but none has attempted the sweep of The Lost Promise or focused so deeply on the role of professors: radicals, conservatives, and the many who wanted to avoid political questions altogether. Schrecker’s magisterial history makes blazingly clear that the troubles that disrupted the university during that pivotal decade haunt the ivory tower to this day
AUTHOR BIOGRAPHY
Ellen Schrecker is a retired professor of history at Yeshiva University and the author of numerous books, including No Ivory Tower: McCarthyism and the Universities, Many Are the Crimes: McCarthyism in America, and The Lost Soul of Higher Education: Corporatization, the Assault on Academic Freedom, and the End of the American University.
REVIEWS
“The Lost Promise is a thunderous exclamation mark to a brilliant career that further cements Schrecker’s status among the very finest historians of America’s twentieth century. Impressive in its scope, uncanny in its research, and gorgeously written, this book is a true tour de force.”
— Jeremy Varon, The New School for Social Research