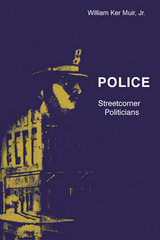 "This book . . . examines the problem of police corruption . . . in such a way that the stereotype of the crude, greedy cop who is basically a grown-up delinquent, if not an out-and-out robber, yields to portraits of particular men, often of earnest good will and even more than ordinary compassion, contending with an enormously demanding and challenging job."—Robert Coles, New Yorker

"Other social scientists have observed policemen on patrol, or have interviewed them systematically. Professor Muir has brought the two together, and, because of the philosophical depth he brings to his commentaries, he has lifted the sociology of the police on to a new level. He has both observed the men and talked with them at length about their personal lives, their conceptions of society and of the place of criminals within it. His ambition is to define the good policeman and to explain his development, but his achievement is to illuminate the philosophical and occupational maturation of patrol officers in 'Laconia' (a pseudonym) . . . . His discussions of [the policemen's] moral development are threaded through with analytically suggestive formulations that bespeak a wisdom very rarely encountered in reports of sociological research."—Michael Banton, Times Literary Supplement
AUTHOR BIOGRAPHY
William Ker Muir, Jr., is professor emeritus of political science at the University of California at Berkeley. He is also the author of Legislature: California's School for Politics, and Prayer in the Public Schools: Law and Attitude Change, both published by the University of Chicago Press.
TABLE OF CONTENTS