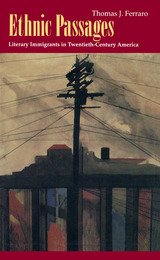 Ethnic literature figures prominently in the current debate on multiculturalism, but even its supporters have had little to say about it as literature, stressing instead its political and sociological context. Thomas J. Ferraro, in this lively and accessible study of modern fiction by Americans of immigrant background, argues that the best of these stories demand—and reward—close reading and attention to questions of genre and literary form.

Ferraro engages the literature of immigration and mobility by asking what motivates its authors and what their work actually accomplishes. He concentrates on five diverse examples of the "up-from-the-ghetto" narrative: Mario Puzo's The Godfather, Anzia Yezierska's Bread Givers, Henry Roth's Call It Sleep, Henry Miller's "The Tailor Shop," and Maxine Hong Kingston's The Woman Warrior. To Ferraro the unsuspected value of these works is that they recast the conventions of ethnic representation, illustrating the power of ethnic writing to capture and redirect the national literary imagination.

Ferraro's sharply observed reading of these five works shows how such reenactments of immigrant mobility test the ideology of assimilation against the writer's experience. Ethnic Passages will refocus discussion of how literature addresses the American conflict between ethnic heritage and the greater opportunities of "mainstream" society.
AUTHOR BIOGRAPHY
Thomas J. Ferraro is Andrew W. Mellon Assistant Professor of English at Duke University.
TABLE OF CONTENTS


Acknowledgments
Introduction
1. Blood in the Marketplace: The Business of Family in The Godfather Narratives
2. "Working Ourselves Up": Middle-Class Realism and the Reproduction of Patriarchy in Bread Givers
3. Oedipus in Brownsville: Parricide, a House Divided, and Call It Sleep
4. The Old Man and the Boys in the Busheling Room: Form, Influence, and "The Tailor Shop"
5. Changing the Rituals: Courageous Daughtering and the Mystique of The Woman Warrior
Conclusion: Remaking America, Revisited
Notes
Index