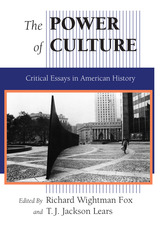 "We are in the midst of a dramatic shift in sensibility, and 'cultural' history is the rubric under which a massive doubting and refiguring of our most cherished historical assumptions is being conducted. Many historians are coming to suspect that the idea of culture has the power to restore order to the study of the past. Whatever its potency as an organizing theme, there is no doubt about the power of the term 'culture' to evoke and stand for the depth of the re-examination not taking place. At a time of deep intellectual disarray, 'culture' offers a provisional, nominalist version of coherence: whatever the fragmentation of knowledge, however centrifugal the spinning of the scholarly wheel, 'culture'—which (even etymologically) conveys a sense of safe nurture, warm growth, budding or ever-present wholeness—will shelter us. The PC buttons on historians' chests today stand not for 'politically correct' but 'positively cultural.'—from the Introduction

More and more scholars are turning to cultural history in order to make sense of the American past. This volume brings together nine original essays by some leading practitioners in the field. The essays aim to exhibit the promise of a cultural approach to understanding the range of American experiences from the seventeenth century to the present.

Expanding on the editors' pathbreaking The Culture of Consumption, the contributors to this volume argue for a cultural history that attends closely to language and textuality without losing sight of broad configurations of power that social and political history at its best has always stressed. The authors here freshly examine crucial topics in both private and public life. Taken together, the essays shed new light on the power of culture in the lives of Americans past and present.
TABLE OF CONTENTS