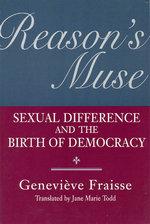 The French Revolution proclaimed the equality of all human beings, yet women remained less than equal in the new society. The exclusion of women at the birth of modern democracy required considerable justification, and by tracing the course of this reasoning through early nineteenth-century texts, Genevieve Fraisse maps a moment of crisis in the history of sexual difference.

Through an analysis of literary, religious, legal, philosophical, and medical texts, Fraisse links a range of positions on women's proper role in society to specific historical and rhetorical circumstances. She shows how the Revolution marked a sharp break in the way women were represented in language, as traditional bantering about the "war of the sexes" gave way to serious discussions of the political and social meanings of sexual difference. Following this discussion on three different planes—the economical, the political, and the biological—Fraisse looks at the exclusion of women against the backdrop of democracy's inevitable lie: the affirmation of an equality so abstract it was impossible to concretely apply.

This study of the place of sexual equality in the founding moment of democracy offers insight into a persistent question: whether female emancipation is to be found through the achievement of equality with men or in the celebration of female difference.
AUTHOR BIOGRAPHY
Geneviève Fraisse is the director of research in philosophy at the Centre National de la Recherche Scientifique and a specialist in the history of women.
TABLE OF CONTENTS