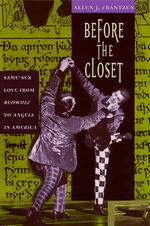 Allen J. Frantzen challenges the long accepted view that the early Middle Ages tolerated and even fostered same-sex relations and that intolerance of homosexuality developed only late in the medieval period. Frantzen shows that in early medieval Europe, the Church did not tolerate same-sex acts, in fact it was an age before people recognized the existence—or the possibility—of the "closet."

With its ambitious scope and elegant style, Before the Closet sets same-sex relations in Anglo-Saxon sources in relation to the sexual themes of contemporary opera, dance, and theatre. Frantzen offers a comprehensive analysis of sources from the seventh to the twelfth century and traces Anglo-Saxon same-sex behavior through the age of Chaucer and into the Renaissance.

"Frantzen's marvelous book . . . opens up a world most readers will never have even known was there. It's a difficult topic, but Frantzen's comprehensive, readable and even wryly funny treatment makes this an unexpected pleasure."—Publishers Weekly, starred review
TABLE OF CONTENTS


Acknowledgments
Introduction: Straightforward
Pt. 1: Trouser Roles and Transvestites
1: What's Love Got to Do with It?
2: Kiss and Tell: Anglo-Saxon Tales of Manly Men and Women
Pt. 2: The Anglo-Saxons
3: Surveying Same-Sex Relations in the Early Middle Ages
4: The Sociology of Sex in Anglo-Saxon Laws and Penitentials
5: The Shadow of Sodom: Same-Sex Relations in Pastoral Prose and Poetry
Pt. 3: From Angles to Angels
6: Sex and the Anglo-Saxons from the Norman Conquest to the Renaissance
7: Alla, Angli, and Angels in America
Afterword: Me and My Shadows
Notes
Index