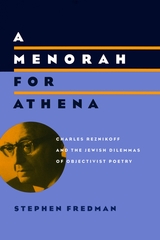 The first major Jewish poet in America and a key figure of the Objectivist movement, Charles Reznikoff was a crucial link between the generation of Pound and Williams, and the more radical modernists who followed in their wake. A Menorah for Athena, the first extended treatment of Reznikoff's work, appears at a time of renewed interest in his contribution to American poetry.

Stephen Fredman illuminates the relationship of Jewish intellectuals to modernity through a close look at Reznikoff's life and writing. He shows that when we regard the Objectivists as modern Jewish poets, we can see more clearly their distinctiveness as modernists and the reasons for their profound impact upon later poets, such as Allen Ginsberg and Charles Bernstein. Fredman also argues that to understand Reznikoff's work more completely, we must see it in the context of early, nonsectarian attempts to make the study of Jewish culture a force in the construction of a more pluralistic society. According to Fredman, then, the indelible images in Reznikoff's poetry open a window onto the vexed but ultimately successful entry of Jewish immigrants and their children into the mainstream of American intellectual life.
AUTHOR BIOGRAPHY
Stephen Fredman is a professor of English at the University of Notre Dame. He is the author of four books, most recently The Grounding of American Poetry: Charles Olson and the Emersonian Tradition.
TABLE OF CONTENTS