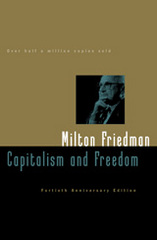 How can we benefit from the promise of government while avoiding the threat it poses to individual freedom? In this classic book, Milton Friedman provides the definitive statement of his immensely influential economic philosophy—one in which competitive capitalism serves as both a device for achieving economic freedom and a necessary condition for political freedom. The result is an accessible text that has sold well over half a million copies in English, has been translated into eighteen languages, and shows every sign of becoming more and more influential as time goes on.
AUTHOR BIOGRAPHY
Milton Friedman is a senior research fellow at the Hoover Institution, Stanford University, and the Paul Snowden Distinguished Service Professor Emeritus of Economics at the University of Chicago. In 1976 he was awarded the Nobel Prize in economics. He has written a number of books, including two with his wife, Rose D. Friedman—the bestselling Free to Choose and Two Lucky People: Memoirs, the latter published by the University of Chicago Press.
TABLE OF CONTENTS

1. The Relation Between Economic Freedom and Political Freedom
2. The Role of Government in a Free Society
3. The Control of Money
4. International Financial and Trade Arrangements
5. Fiscal Policy
6. The Role of Government in Education
7. Capitalism and Discrimination
8. Monopoly and the Social Responsibility of Business and Labor
9. Occupational Licensure
10. The Distribution of Income
11. Social Welfare Measures
12. Alleviation of Poverty
13. Conclusion