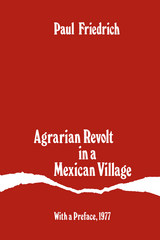 Agrarian Revolt in a Mexican Village deals with a Taráscan Indian village in southwestern Mexico which, between 1920 and 1926, played a precedent-setting role in agrarian reform. As he describes forty years in the history of this small pueblo, Paul Friedrich raises general questions about local politics and agrarian reform that are basic to our understanding of radical change in peasant societies around the world. Of particular interest is his detailed study of the colorful, violent, and psychologically complex leader, Primo Tapia, whose biography bears on the theoretical issues of the "political middleman" and the relation between individual motivation and socioeconomic change. Friedrich's evidence includes massive interviewing, personal letters, observations as an anthropological participant (e.g., in fiesta ritual), analysis of the politics and other village culture during 1955-56, comparison with other Taráscan villages, historical and prehistoric background materials, and research in legal and government agrarian archives.
TABLE OF CONTENTS