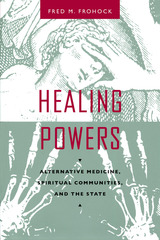 The personal testimony of individuals engaged in healing practices and the opposing voices of orthodox and alternative medicines are the center of Healing Powers. Focusing on medical norms and practices and on competing philosophies of the mind, the body, reality, and rationality across radically different "belief systems", Fred Frohock clarifies the social and legal dilemmas represented by "scientific medicine" and "alternative care."

"Frohock goes beyond the often irreconcilable differences between scientific biomedicine and alternative care by clarifying the social and legal dilemmas they present. . . . A noteworthy contribution forcing us to rethink what medical care is all about."—Jeffrey Michael Clare, Journal of the American Medical Association

"The book does more and better than simply provide a social-scientific proposal. It also gives not only a hearing but a voice to those who follow alternative therapies. . . . Frohock's accounts of their stories—along with the stories of the medical professionals—are eloquent and fascinating."—Allen Verhey, Medical Humanities Review

"Contains a storehouse of valuable information about the historical, philosophical, and psychological bases of alternative approaches to healing."—Marshall B. Kapp, New England Journal of Medicine

"Frohock introduces us to the scientific naturopaths and to physicians who believe in the mind's power to heal, to charismatics who believe in but cannot explain their powers, to those who test God and those who merely accept. He writes so well that I felt I had met these people."—Arthur W. Frank, Christian Century
TABLE OF CONTENTS