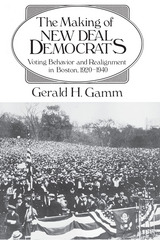 "Why is The Making of New Deal Democrats so significant? One of the major controversies in the study of American elections has to do with the nature of electoral realignments. One school argues that a realignment involves a major shift of voters from one party to another, while another school argues that the process consists largely of mobilization of previously inactive voters. The debate is crucial for understanding the nature of the New Deal realignment.

Almost all previous work on the subject has dealt with large-scale national patterns which make it difficult to pin down the precise processes by which the alignment took place. Gamm's work is most remarkable in that it is a close analysis of shifting voter alignments on the precinct and block level in the city of Boston. His extremely detailed and painstaking work of isolating homogeneous ethnic units over a twenty-year period allows one to trace the voting behavior of the particular ethnic groups that ultimately formed the core of the New Deal realignment."—Sidney Verba, Harvard University
AUTHOR BIOGRAPHY
Gerald H. Gamm is a Ph.D. candidate in a joint program in history and government at Harvard University.
TABLE OF CONTENTS