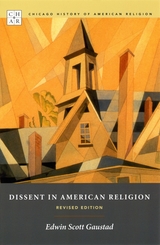 University of Chicago Press, 2006
Paper: 978-0-226-28451-4
Dissent in American Religion, originally published in 1973, was the first book to present religious dissent in the United States as a pervasive but hidden and often-ignored stream in American life. The first volume in the Chicago History of American Religion series, it reviewed the history of our nation’s longest dissenting tradition—a tradition older and richer in the realm of religion than in any other facet of national life. Indeed, Edwin Scott Gaustad argued that religious dissent was essential to the character of the American religious experience and stood in profound disagreement with society’s orthodox values and beliefs.

This new edition, which reinaugurates the Chicago History of American Religion series under the new editorship of John Corrigan, features new commentary by Gaustad and Corrigan on the past thirty years of American religious history and the importance of understanding dissent in American religion today.

“This is an important and erudite work which shows the originality and scope which scholarship can bring to human experience.” —Los Angeles Times

“We shall understand the religious past and present better for reading Gaustad’s brief, well-written, helpful book.” —Commonweal

AUTHOR BIOGRAPHY
Edwin Scott Gaustad is professor emeritus of history and religious studies at the University of California, Riverside.
TABLE OF CONTENTS