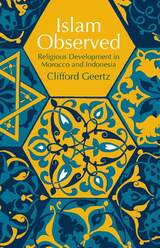 Islam Observed: Religious Development in Morocco and Indonesia
by Clifford Geertz
University of Chicago Press, 1971
Paper: 978-0-226-28511-5
"In four brief chapters," writes Clifford Geertz in his preface, "I have attempted both to lay out a general framework for the comparative analysis of religion and to apply it to a study of the development of a supposedly single creed, Islam, in two quite contrasting civilizations, the Indonesian and the Moroccan."

Mr. Geertz begins his argument by outlining the problem conceptually and providing an overview of the two countries. He then traces the evolution of their classical religious styles which, with disparate settings and unique histories, produced strikingly different spiritual climates. So in Morocco, the Islamic conception of life came to mean activism, moralism, and intense individuality, while in Indonesia the same concept emphasized aestheticism, inwardness, and the radical dissolution of personality. In order to assess the significance of these interesting developments, Mr. Geertz sets forth a series of theoretical observations concerning the social role of religion.