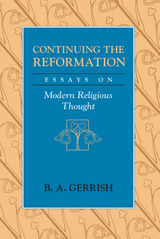 Modern Christian religious thought, B. A. Gerrish argues, has constantly revised the inherited faith. In these twelve essays, written or published in the 1980s, one of the most distinguished historical theologians of our time examines the changes that occurred as the Catholic tradition gave way to the Reformation and an interest in the phenomenon of believing replaced adherence to unchanging dogma.

Gerrish devotes three essays to each of four topics: Martin Luther and the Reformation; religious belief and the Age of Reason; Friedrich Schleiermacher and the renewal of Protestant theology; and Schleiermacher's disciple Ernst Troeltsch, for whom the theological task was to give a rigorous account of the faith prevailing in a particular religious community at a particular time. Gerrish shows how faith itself has become a primary object of inquiry, not only in the newly emerging philosophy of religion but also in a new style of church theology which no longer assumes that faith rests on immutable dogmas. For Gerrish, the new theology of Protestant liberalism takes for its primary object of inquiry the changing forms of the religious life. This important book will interest scholars of systematic Christian theology, modern intellectual and cultural history, and the history and philosophy of religion.
AUTHOR BIOGRAPHY
B. A. Gerrish is the John Nuveen Professor and professor of historical theology in the Divinity School at the University of Chicago.
TABLE OF CONTENTS


Preface
Abbreviations
Introduction
Part One - The Reformation
1. The Chief Article—Then and Now
2. Doctor Martin Luther: Subjectivity and Doctrine in the Luthern Reformation
3. Discerning the Body: Sign and Reality in Luther's Controversy with the Swiss
Part Two - The Age of Reason
4. Faith and Existence in the Philosophy of F. H. Jacobi
5. The Secret Religion of Germany: Christian Piety and the Pantheism Controversy
6. Practical Belief: Friedrich Karl Forberg and the Fictionalist View of Religious Language
Part Three - Schleiermacher
7. Friedrich Schleiermacher (1768-1834)
8. From Calvin to Schleiermacher: The Theme and the Shape of Christian Dogmatics
9. Nature and the Theater of Redemption: Schleiermacher on Christian Dogmatics and the Creation Story
Part Four - Ernst Troeltsch
10. Protestantism and Progress: An Anglo-Saxon View of Troeltsch
11. From Dogmatik to Glaubenslehre: A Paradigm Change in Modern Theology?
12. Ubi theologia, ibi ecclesia? Schleiermacher, Troeltsch, and the Prospect for an Academic Theology
Index