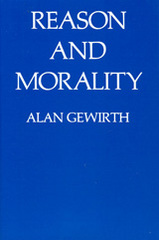 "Most modern philosophers attempt to solve the problem of morality from within the epistemological assumptions that define the dominant cultural perspective of our age. Alan Gewirth's Reason and Morality is a major work in this ongoing enterprise. Gewirth develops, with patience and skill, what he calls a 'modified naturalism' in which morality is derived by logic alone from the concept of action. . . . I think that the publication of Reason and Morality is a major event in the history of moral philosophy. It develops with great power a new and exciting position in ethical naturalism. No one, regardless of philosophical stance, can read this work without an enlargement of mind. It illuminates morality and agency for all."—E. M. Adams, The Review of Metaphysics

"This is a fascinating study of an apparently intractable problem. Gewirth has provided plenty of material for further discussion, and his theory deserves serious consideration. He is always aware of possible rejoinders and argues in a rigorous manner, showing a firm grasp of the current state of moral and political philosophy."—Mind
TABLE OF CONTENTS