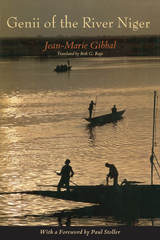 The river Niger, a source of life and danger for the people in impoverished eastern Mali, is also the origin of elaborate mythology. From his travels through Mali and down the Niger in a dugout canoe, Jean-Marie Gibbal has created a personal documentary of the cultures of the region. The result is at once an ethnography of cultures in crisis and a poetic evocation of the environment and people he encountered.

Gibbal portrays the river as the dominant, cohesive force among people in the face of social and environmental strife. He focuses on the Ghimbala healing cult, which centers on the river, and how the cult structures social relations in the region. Gibbal vividly recreations the Ghimbala rites, nocturnal ceremonies of spirit possession and seance which animate the water spirits, or genii, that inhabit the river. The genii, he finds, provide the strength of social identity in a world where famine and competing versions of Islam threaten to overpower traditional culture.

In its original French publication, The Genii of the River Niger was honored with an Alexandra David-Neel literary prize in 1989. Its powerful lyricism, combined with fascinating ethnographic depth, will delight general readers and specialists alike and will stir debates among specialists in African studies, the anthropology of religion, and literature.
AUTHOR BIOGRAPHY
At the time of his death in 1993, Jean-Marie Gibbal was research director at the Centre National de la Recherche Scientifique, Paris.
TABLE OF CONTENTS


Foreword by Paul Stoller
Translator's Note
Glossary
Preparations
1. On the River Niger
2. The Emperor and the Magician
3. Between Above and Below
4. Children of the River
5. Live Devils
6. Separate in Order to Heal
7. The Genii Club
8. The Solitude of the Gaw
9. From Experience to Fiction
Thoughts from the Between
Postscript
Appendix 1 - The Meaning of Sheikou Hamadou and Wanda Samba
Appendix 2 - Moussa's Great Deeds
Appendix 3 - The Heinous Crime of Komaïga and Djini Maïrama
Appendix 4 - Table of the Principal Plants Used in the Ghimbala
Appendix 5 - A Kanji
Bibliography
Index