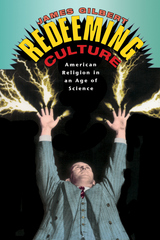 In this intriguing history, James Gilbert examines the confrontation between modern science and religion as these disparate, sometimes hostile modes of thought clashed in the arena of American culture. Beginning in 1925 with the infamous Scopes trial, Gilbert traces nearly forty years of competing attitudes toward science and religion.

"Redeeming Culture provides some fascinating background for understanding the interactions of science and religion in the United States. . . . Intriguing pictures of some of the highlights in this cultural exchange."—George Marsden, Nature

"A solid and entertaining account of the obstacles to mutual understanding that science and religion are now warily overcoming."—Catholic News Service

"[An] always fascinating look at the conversation between religion and science in America."—Publishers Weekly
TABLE OF CONTENTS


Acknowledgments
1: The Promise of Genesis
2: William Jennings Bryan, Scientist
3: The Republic of Science
4: A World without John Dewey
5: "A Magnificent Laboratory, a Magnificent Control Room"
6: Churching American Soldiers
7: Rendezvous at Rancho La Brea
8: Two Men of Science
9: "Almost of Message from God Himself"
10: Transgressing the Heavens
11: The Religious Possibilities of Social Science
12: The Religion of Science
13: Space Gothic in Seattle
14: Conclusion
Notes
Index