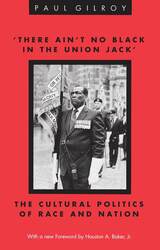 'There Ain't no Black in the Union Jack': The Cultural Politics of Race and Nation
by Paul Gilroy
University of Chicago Press, 1991
Paper: 978-0-226-29427-8
Gilroy demonstrates the enormous complexity of racial politics in England today. Exploring the relationships among race, class, and nation as they have evolved over the past twenty years, he highlights racist attitudes that transcend the left-right political divide. He challenges current sociological approaches to racism as well as the ethnocentric bias of British cultural studies.

"Gilroy demonstrates effectively that cultural traditions are not static, but develop, grow and indeed mutate, as they influence and are influenced by the other changing traditions around them."—David Edgar, Listener Review of Books.

"A fascinating analysis of the discourses that have accompanied black settlement in Britain. . . . An important addition to the stock of critical works on race and culture."—David Okuefuna, Chicago Tribune
TABLE OF CONTENTS