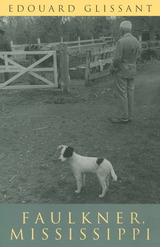 Faulkner, Mississippi
by Edouard Glissant
translated by Barbara B. Lewis and Thomas C. Spear
University of Chicago Press, 2000
Paper: 978-0-226-29994-5
In 1989, the Caribbean writer Edouard Glissant visited Rowan Oak, William Faulkner's home in Oxford, Mississippi. His visit spurred him to write a revelatory book about the work of one of our greatest but still least-understood American writers.

"A fascinating way to read Faulkner. . . .[Glissant's] case is nothing less than that, no matter how Faulkner's personal Furies twisted his public speech, Faulkner was a great, world-beating multiculturalist."—Jonathan Levi, Los Angeles Times Book Review

"Glissant tries to engage Faulkner on many fronts simultaneously, positioning himself as a critic, a fellow artist and as a descendant of slaves. . . He makes a convincing case that Faulkner is not just another 'dead white male author.'"—Scott Yarbrough, Raleigh News & Observer


1. The Road to Rowan Oak
2. The Faulkner Dossier
3. In Black and White
4. The Trace
5. The Real—The Deferred
6. The Deferred—The Word
7. The Frontier—The Beyond—Back on the Trace
Glossary
Sources