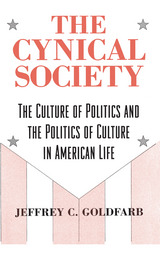 The Cynical Society is a study of the political despair and abdication of (individual) responsibility Goldfarb calls cynicism—a central but unexamined aspect of contemporary American political and social life. Goldfarb reveals with vivid strokes how cynicism undermines our capacity to think about society's strengths and weaknesses. Drawing on thinkers from Alexis de Tocqueville to Allan Bloom and on such recent works as Beloved, Bonfire of the Vanities, and Mississippi Burning, The Cynical Society celebrates cultural pluralism's role in democracy.
AUTHOR BIOGRAPHY
Jeffrey C. Goldfarb is professor of sociology at the New School for Social Research. He is the author of After the Fall, Beyond Glasnost, and On Cultural Freedom, the latter two published by the University of Chicago Press.
TABLE OF CONTENTS