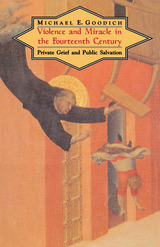 As war, pestilence, and famine spread through Europe in the Middle Ages, so did reports of miracles, of hopeless victims wondrously saved from disaster. These "rescue miracles," recorded by over one hundred fourteenth-century cults, are the basis of Michael Goodich's account of the miraculous in everyday medieval life.

Rescue miracles offer a wide range of voices rarely heard in medieval history, from women and children to peasants and urban artisans. They tell of salvation not just from the ravages of nature and war, but from the vagaries of a violent society—crime, unfair judicial practices, domestic squabbles, and communal or factional conflict. The stories speak to a collapse of confidence in decaying institutions, from the law to the market to feudal authority. Particularly, the miraculous escapes documented during the Hundred Years' War, the Italian communal wars, and other conflicts are vivid testimony to the end of aristocratic warfare and the growing victimization of noncombatants.

Miracles, Goodich finds, represent the transcendent and unifying force of faith in a time of widespread distress and the hopeless conditions endured by the common people of the Middle Ages. Just as the lives of the saints, once dismissed as church propaganda, have become valuable to historians, so have rescue miracles, as evidence of an underlying medieval mentalite. This work expands our knowledge of that state of mind and the grim conditions that colored and shaped it.
TABLE OF CONTENTS


Preface
1: Cult and Miracle in the Fourteenth Century
2: The Church as Mediator and Victim
3: Crime and Punishment
4: The Vagaries of Family Life
5: Children as Victims
6: The Violence of Nature
7: The Ravages of War
8: Conclusion
Notes
List of Cults Cited
Index