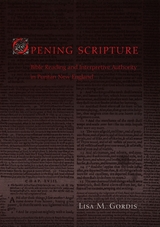 Opening Scripture: Bible Reading and Interpretive Authority in Puritan New England
by Lisa M. Gordis
University of Chicago Press, 2003
Cloth: 978-0-226-30412-0
"Opening Scripture provides a thorough and original account of ministerial and lay strategies for interpreting Scripture in the Massachusetts Bay. Demonstrating an impressive command of the vast literature and history of the period, Lisa Gordis moves deftly through discussions of major figures and events. This is a significant intervention in the study of Puritan New England."—Sandra M. Gustafson, University of Notre Dame

What role did the Bible really play in Puritan New England? Many have treated it as a blunt instrument used to cudgel dissenters into submission, but Lisa M. Gordis reveals instead that Puritan readings of the Bible showed great complexity and literary sophistication—so much complexity, in fact, that controversies over biblical interpretation threatened to tear Puritan society apart.

Drawing on Puritan preaching manuals and sermons as well as the texts of early religious controversies, Gordis argues that Puritan ministers did not expect to impose their views on their congregations. Instead they believed that interpretive consensus would emerge from the process of reading the Bible, with the Holy Spirit assisting readers to understand God's will. Treating the conflict over Roger Williams, the Antinomian Controversy, and the reluctant compromises of the Halfway Covenant as symptoms of a crisis that was as much literary as it was social or spiritual, Opening Scripture explores the profound consequences of Puritan negotiations over biblical interpretation for New England's literature and history.
AUTHOR BIOGRAPHY
Lisa M. Gordis is an assistant professor of English at Barnard College.
TABLE OF CONTENTS


Acknowledgments
Introduction: Opening the Text
1. "Humane Skill" and "The Arte of Prophecying"
2. John Cotton: Reading, Preaching, and the Rhetoric of Inevitability
3. Thomas Shepard: God's Word and God's Words
4. Applying the Word Home: Thomas Hooker's Affective Reading and Preaching
5. "Goe Home and Consider": Lay Responses to the Preached Text
6. "Mist and Fog": Roger Williams and the Problem of Interpretation
7. "All the Strife amongst Us": Consensus, Reading, and Revelation in the Antinomian Controversy
Epilogue: Interpretive Expertise and Questions of Baptism
Appendix: The Problem of the Texts
Abbreviations
Notes
Bibliography
Index