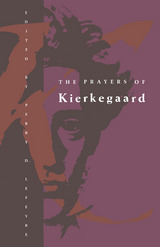 Soren Kierkegaard's influence has been felt in many areas of human thought from theology to psychology. The nearly one hundred of his prayers gathered here from published works and private papers, not only illuminate his own life of prayer, but speak to the concerns of Christians today.

The second part of the volume is a reinterpretation of the life and thought of Kierkegaard. Long regarded as primarily a poet or a philosopher, Kierkegaard is revealed as a fundamentally religious thinker whose central problem was that of becoming a Christian, of realizing personal existence. Perry D. LeFevre's penetrating analysis takes the reader to the religious center of Kierkegaard's world.
TABLE OF CONTENTS


Pt. I: The Prayers
1: God, the Father
2: God, the Son
3: God, the Holy Spirit
4: For Special Occasions
Pt. II: An Interpretation of Kierkegaard's Life and Thought
1: His Life
2: Basic Themes
3: Toward the Christian Life
4: Man of Prayer
Notes
The Works of Kierkegaard in English