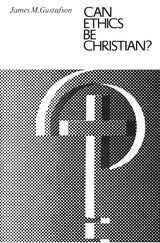 Is there a special relation between religious beliefs and moral behavior? In particular, is there a distinctive Christian moral character and how is this manifested in moral actions? The influential theologian James M. Gustafson probes these questions and offers an analysis of the distinctively religious reasons of the "heart and mind" which constitute the basis for a Christian ethics.

Professor Gustafson grounds his discussion in a concrete example of moral conduct which deeply impressed him. The incident—narrated in detail at the start and referred to throughout—concerns a nonreligious colleague who came to the aid of an intoxicated soldier. Although seemingly trivial, this incident, in the author's view, approximates the normal sorts of experiences in which individuals have to make moral decisions every day; it becomes a touchstone to investigate the logical, social, and religious elements in moral decision making.
AUTHOR BIOGRAPHY
James M. Gustafson is University Professor in the Divinity School and in the Committee on Social Thought at the University of Chicago. His other books include Ethics from Theocentric Perspective, volumes 1 and 2; Christ and the Moral Life; Protestant and Roman Catholic Ethics; and Treasure in Earthen Vessels; The Church as a Human Community, all published by the University of Chicago Press.
TABLE OF CONTENTS