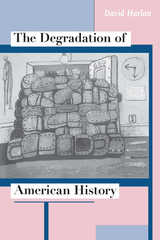 American historical writing has traditionally been one of our primary forms of moral reflection. However, David Harlan argues that in the disillusionment following the 1960s, history abandoned its redemptive potential and took up the methodology of the social sciences. In this provocative new book, Harlan describes the reasons for this turn to objectivity and professionalism, explains why it failed, and examines the emergence of a New Traditionalism in American historical writing.

Part One, "The Legacy of the Sixties," describes the impact of literary theory in the 1970s and beyond, the rise of women's history, the various forms of ideological analysis developed by historians on the left, and the crippling obsession with professionalism in the 1980s. Part Two, "The Renewal of American Historical Writing," focuses on the contributions of John Patrick Diggins, Hayden White, Richard Rorty, Elaine Showalter, Henry Louis Gates Jr., and others. Harlan argues that at the end of the twentieth century American historical writing is perfectly poised to become what it once was: not one of the social sciences in historical costume, but a form of moral reflection that speaks to all Americans.

"[A] wholly admirable work. This book will be talked about for years."—Library Journal
TABLE OF CONTENTS


Acknowledgments
Introduction: "It Hath No Relish of Salvation in It": American Historical
Writing at the End of the Twentieth Century
Pt. 1: The Legacy of the Sixties
1: Deeper into the Wilderness: History Takes the Linguistic Turn
2: A People Blinded from Birth: American History according to the Left
3: Doubts and Dispossessions: Feminist History in the 1990s
4: After Looking into the Abyss: The Promise of Professionalism
Pt. 2: The Renewal of American Historical Writing
5: The Return of the Moral Imagination
6: A Choice of Inheritance
7: The Dream of a Common History
8: Love and Objectivity
Epilogue
Notes
Index