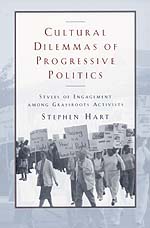 Why have conservatives fared so much better than progressives in recent decades, even though polls show no significant move to the right in public opinion? Cultural Dilemmas of Progressive Politics highlights one reason: that progressives often adopt impoverished modes of discourse, ceding the moral high ground to their conservative rivals. Stephen Hart also shows that some progressive groups are pioneering more robust ways of talking about their issues and values, providing examples other progressives could emulate.

Through case studies of grassroots movements—particularly the economic justice work carried on by congregation-based community organizing and the pursuit of human rights by local members of Amnesty International—Hart shows how these groups develop distinctive ways of talking about politics and create characteristic stories, ceremonies, and practices. According to Hart, the way people engage in politics matters just as much as the content of their ideas: when activists make the moral basis for their activism clear, engage issues with passion, and articulate a unified social vision, they challenge the recent ascendancy of conservative discourse.

On the basis of these case studies, Hart addresses currently debated topics such as individualism in America and whether strains of political thought strongly informed by religion and moral values are compatible with tolerance and liberty.
AUTHOR BIOGRAPHY
Stephen Hart is an adjunct member of the sociology department at State University of New York, Buffalo. He is the author of What Does the Lord Require? How American Christians Think about Economic Justice.
TABLE OF CONTENTS