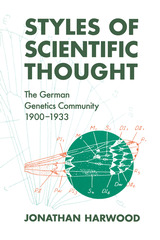 In this detailed historical and sociological study of the development of scientific ideas, Jonathan Harwood argues that there is no such thing as a unitary scientific method driven by an internal logic. Rather, there are national styles of science that are defined by different values, norms, assumptions, research traditions, and funding patterns.

The first book-length treatment of genetics in Germany, Styles of Scientific Thought demonstrates the influence of culture on science by comparing the American with the German scientific traditions. Harwood examines the structure of academic and research institutions, the educational backgrounds of geneticists, and cultural traditions, among many factors, to explain why the American approach was much more narrowly focussed than the German.

This tremendously rich book fills a gap between histories of the physical sciences in the Weimar Republic and other works on the humanities and the arts during the intellectually innovative 1920s, and it will interest European historians, as well as sociologists and philosophers of science.
AUTHOR BIOGRAPHY
Jonathan Harwood is senior lecturer in the Centre for the History of Science, Technology, and Medicine at the University of Manchester.
TABLE OF CONTENTS


Chapter 1: Getting Started: the Argument, Method, and Context
1.1 An Overview of the Argument
1.2 Styles of Thought
1.3 The Revolution in Morphology
1.4 The Response to Specialization
1.5 The Early Days of Mendelism in Germany
Part 1: The Peculiarities of German Genetics
Chapter 2: The Genetics of Development
2.1 Developmental Genetics in Germany during the 1920s
2.2 Cytoplasmic Inheritance
2.3 In Search of Simplicity: George Beadle's Approach to Physiological Genetics
2.4 Conclusion
Chapter 3: Genetics and the Evolutionary Process
3.1 The Debate over Natural Selection in Interwar Germany
3.2 The Implications of Cytoplasmic Inheritance for Evolutionary Theory
3.3 The Controversy over Dauermodifications
3.4 The Relation between the Plasmon and Dauermodifications
3.5 Conclusion
Chapter 4: Demarcating the Discipline: Germany versus the United States
4.1 Patterns of Growth in Higher Education and Research
4.2 The Effect of University Structure upon Specialization
4.3 Conclusion
Chapter 5: Shifting Focus
Part 2: Styles of Thought within the German Genetics Community
Chapter 6: Mapping the German Genetics Community
6.1 Research Programs
6.2 Forms of Organization
6.3 Patterns of Funding
6.4 Institutional Developments after 1933
6.5 Conclusion
Chapter 7: Imputing Styles of Thought
7.1 Portraits in Contrast: Alfred Kuhn and Erwin Baur
7.2 Imputing Styles of Thought
7.3 Differences of Political Outlook
7.4 Conclusion
Chapter 8: Mandarins Confront Modernization
8.1 Bildung as Ideology
8.2 Modernization Diversifies the Professoriate
8.3 The Politics of the Professoriate
8.4 Integrating Institutional and Societal Explanations
8.5 Conclusion
Chapter 9: The Politics of Nuclear-Cytoplasmic Relations
9.1 Critics of the Plasmon Theory
9.2 Revisionist Conceptions of the Plasmon
9.3 Models of Cellular Order
9.4 The Cell as Political Microcosm
9.5 Conclusion, Conclusion