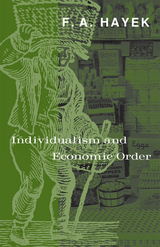 In this collection of writings, Nobel laureate Friedrich A. Hayek discusses topics from moral philosophy and the methods of the social sciences to economic theory as different aspects of the same central issue: free markets versus socialist planned economies. First published in the 1930s and 40s, these essays continue to illuminate the problems faced by developing and formerly socialist countries.