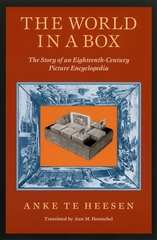 This is a book about a box that contained the world. The box was the Picture Academy for the Young, a popular encyclopedia in pictures invented by preacher-turned-publisher Johann Siegmund Stoy in eighteenth-century Germany. Children were expected to cut out the pictures from the Academy, glue them onto cards, and arrange those cards in ordered compartments—the whole world filed in a box of images.

As Anke te Heesen demonstrates, Stoy and his world in a box epitomized the Enlightenment concern with the creation and maintenance of an appropriate moral, intellectual, and social order. The box, and its images from nature, myth, and biblical history, were intended to teach children how to collect, store, and order knowledge. te Heesen compares the Academy with other aspects of Enlightenment material culture, such as commercial warehouses and natural history cabinets, to show how the kinds of collecting and ordering practices taught by the Academy shaped both the developing middle class in Germany and Enlightenment thought. The World in a Box, illustrated with a multitude of images of and from Stoy's Academy, offers a glimpse into a time when it was believed that knowledge could be contained and controlled.
AUTHOR BIOGRAPHY
Anke te Heesen is a research associate at the Max Planck Institute for the History of Science in Berlin. She is coeditor of Sammeln als Wissen: Das Sammeln und seine wissenschaftsgeschichtliche Bedeutung.
TABLE OF CONTENTS

Introduction: "A Storehouse of the Finest Materials"

1 The Work and Its Author

2 From the Manufacture of Books to teh Pedagogical Cabinet

3 Sources and Structure of the Picture Academy for the Young

4 Man and His Image in the Eighteenth Century

5 The Box and Collecting

6 The Box and Its Uses

Conclusion: The World Boxed In, Then and Now