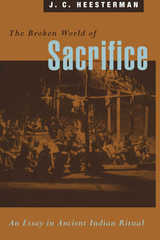 In this book, J. C. Heesterman attempts to understand the origins and nature of Vedic sacrifice—the complex compound of ritual practices that stood at the center of ancient Indian religion.

Paying close attention to anomalous elements within both the Vedic ritual texts, the brahmanas, and the ritual manuals, the srautasutras, Heesterman reconstructs the ideal sacrifice as consisting of four moments: killing, destruction, feasting, and contest. He shows that Vedic sacrifice all but exclusively stressed the offering in the fire—the element of destruction—at the expense of the other elements. Notably, the contest was radically eliminated. At the same time sacrifice was withdrawn from society to become the sole concern of the individual sacrificer. The ritual turns in on the individual as "self-sacrificer" who realizes through the internalized knowledge of the ritual the immortal Self. At this point the sacrificial cult of the fire recedes behind doctrine of the atman's transcendence and unity with the cosmic principle, the brahman.

Based on his intensive analysis Heesterman argues that Vedic sacrifice was primarily concerned with the broken world of the warrior and sacrificer. This world, already broken in itself by the violence of the sacrificial contest, was definitively broken up and replaced with the ritrualism of the single, unopposed sacrificer. However, the basic problem of sacrifice—the riddle of life and death—keeps breaking too surface in the form of incongruities, contradictions, tensions, and oppositions that have perplexed both the ancient ritual theorists and the modern scholar.
TABLE OF CONTENTS


Preface
Introduction
1. Sacrifice
2. Ritual
3. The Cult of the Fire
4. The Periodicity and Mobility of the Fire
5. Priest and Sacrificer
6. The Consecrated
7. The Sacrificial Meal
8. Epilogue
Abbreviations
Notes
Index