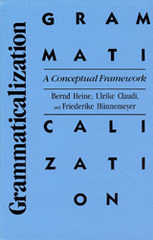 Grammaticalization, the process of converting regular lexical items and structures into conventionally interpreted grammatical morphemes, has traditionally been perceived as a syntactic or morphological process. Presenting a wealth of evidence from African languages, the authors argue that the development of grammatical categories is in fact strongly influenced by pragmatic and cognitive forces, factors that are located outside the confines of language structure. They discuss previous models and relate grammaticalization studies to alternative approaches such as localism and natural grammar theory.

This volume challenges theories which describe language as a static system, as well as those which assume that linguistic categorization is based on discrete morpheme types, word classes, or sentence constituents. In contrast, the book's central argument is that both language structure and language use are dynamic phenomena and that linguistic behavior is essentially a creative activity. That creativity manifests itself, for example, in conceptual transfer leading to the encoding of more abstract concepts and of grammatical categories. Another key element of this theory is captured in the term "grammaticalization chain," which refers to a specific kind of linguistic category which cuts across morpheme types and word classes and has both a synchronic and diachronic dimension.
AUTHOR BIOGRAPHY
Bernd Heine is professor in and director of the Institute of African Studies at the University of Köln, West Germany. Ulrike Claudi is lecturer at the Institute of African Studies at the University of Köln. Friederike Hünnemeyer is co-editor of Working Papers in African Studies.
TABLE OF CONTENTS


Acknowledgments
Abbreviations
1. Introduction
1.1. Some Notions of Grammaticalization
1.2. Previous Approaches
1.3. The Present Study
2. Cognitive Processes
2.1. On the Motivation of Grammaticalization
2.2. Source Structures
2.3. From Source to Target
2.4. Metaphor
3. Context-Induced Reinterpretations
3.1. Discontinuity versus Continuity
3.2. Token versus Type
3.3. From Metonymy to Metaphor
3.4. Metaphor, Context, and Creativity
4. Outline of a Framework
4.1. Macrostructure versus Microstructure
4.2. On the Relation between Focal Senses
4.3. Some Revisions
4.4. Previous Models
4.5. Localism
4.6. Natural Grammar
5. From Lexical to Grammatical Concepts
5.1. Patterns of Transfer
5.2. Generalizations
5.3. Linguistic Implications
5.4. Discussion
5.5. N-Adpositions versus V-Adpositions
6. From Less to More Grammatical Concepts
6.1. Alienability: His Children Are Not His Children
6.2. A Conceptual Network of Allative Case Marking
6.3. The Function Contiguity Hypothesis
6.4. Degrees of Grammaticalization
6.5. On the Significance of Image-Schema Preservation
6.6. A Multidimensional Cognitive Space?
6.7. Conclusions
7. Some "Abstract Worlds"
7.1. The World of Probabilities
7.2. The World of Text
7.3. The World of Expectations
7.4. On the Ubiquity of Metaphor
8. The Linguistic Cycle
8.1. Some General Observations
8.2. Reanalysis
8.3. Dependency
8.4. Grammaticalization Chains
8.5. Grammaticalization and Discourse Role
8.6. Recategorialization
8.7. From Discourse Pragmatics to Grammar
8.8. The Linguistic Cycle
9. Panchronic Grammar
9.1. BACK in So
9.2. On Some Case Functions of Four German Prepositions
9.3. Conclusions
Notes
References
Indexes