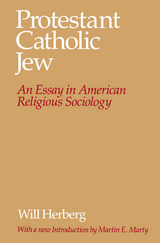 Protestant--Catholic--Jew: An Essay in American Religious Sociology
by Will Herberg
University of Chicago Press, 1983
Paper: 978-0-226-32734-1
"The most honored discussion of American religion in mid-twentieth century times is Will Herberg's Protestant-Catholic-Jew. . . . [It] spoke precisely to the mid-century condition and speaks in still applicable ways to the American condition and, at its best, the human condition."—Martin E. Marty, from the Introduction

"In Protestant-Catholic-Jew Will Herberg has written the most fascinating essay on the religious sociology of America that has appeared in decades. He has digested all the relevant historical, sociological and other analytical studies, but the product is no mere summary of previous findings. He has made these findings the basis of a new and creative approach to the American scene. It throws as much light on American society as a whole as it does on the peculiarly religious aspects of American life. Mr. Herberg. . . illumines many facets of the American reality, and each chapter presents surprising, and yet very compelling, theses about the religious life of this country. Of all these perhaps the most telling is his thesis that America is not so much a melting pot as three fairly separate melting pots."—Reinhold Niebuhr, New Yorks Times Book Review
AUTHOR BIOGRAPHY
Will Herberg was graduate professor of Judaic studies and social philosophy at Drew University. His other books include Judaism and Modern Man, The Writings of Martin Buber, and Four Existentialist Theologians.
TABLE OF CONTENTS