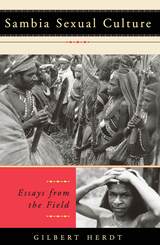 Over the course of 20 years, Herdt made 13 field trips to live with the Sambia in order to understand sexuality and ritual in the context of warfare and gender segregation. Herdt's essays examine Sambia fetish and fantasy, ritual nose-bleeding, the role of homoerotic insemination, the role of the father and mother in the process of identity formation, and the creation of a "third sex" in nature and culture. He also discusses the representation of homosexuality in cross-cultural literature on premodern societies, arguing that scholars have long viewed desires through the tropes of negative western models. Herdt asks us to reconsider the realities and subjective experiences of desires in their own context, and to rethink how the homoerotic is expressed in radically divergent sexual cultures.

AUTHOR BIOGRAPHY
Gilbert Herdt is professor and director of the Graduate Program in Human Sexuality at the California Institute of Integral Studies in San Francisco and director emeritus of the National Sexuality Resource Center at San Francisco State University. His books include Sambia Sexual Culture: Essays from the Field, also published by the University of Chicago Press.
TABLE OF CONTENTS