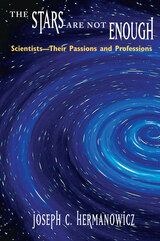 Based on sixty interviews with physicists at universities across the United States, The Stars are Not Enough offers a detailed and intimate account of the worlds in which scientists work. Joseph C. Hermanowicz looks at a range of scientists from young graduate students to older professionals well into their careers. The result is a colorful portrait of a profession and its diverse cast of characters.

These deeply personal narratives reveal dreams of fame and glory, in which scientists confess their ambitions of becoming the next Newton or Einstein. However, these scientists also discuss the meaning of success and failure. We hear their stories of aspiration and anxiety, disappointment and tragedy, hope and achievement; we are privy to their doubts and to what they consider to be their limitations and weaknesses. As the scientists age in their professions, the specter of failure often visits them, and they have to accept something less than scientific immortality or even the Nobel Prize.

Ultimately these stories give us more than an inside look at the details of careers in science, they also examine ambition by uncovering the forces that drive people in their professions and by describing how these forces persist or fade over time. Ambition for greatness often ignites a career and often sustains it. Yet, as Hermanowicz's study reveals, greatness eludes nearly all people in their heroic quests for extraordinary achievement. The Stars Are Not Enough offers a fascinating account that will appeal to anyone interested in how people's dreams blossom and evolve.


List of Figures and Tables
Preface
Introduction
Careers in Context: Theoretic Foundations
Why Scientists?
Conclusion and Overview
1. The Study and Its Context
The Interviews
The Universities
Methodological Considerations
2. Academic Worlds
Mapping Moral Orders
Boundary Work and Identity
Conclusion
3. Professional Pasts
Looking Back on Beginning
The Fog of Youth
Interworld Differences: Points of Professional Destination
Intraworld Differences: Points of Professional Divergence
Conclusion
4. Professional Futures
Interworld Differences: Being and Becoming
Intraworld Differences: Off the Beaten Track
Power of Place, Power of Individuals
Feeling the Effects of Time
Conclusion
5. Selves in Conflict in Harmony
Dealing with Demons: Inner Voices and Self-Confrontation
Toward an Assessment of Overall Satisfaction
Women Scientists
Conclusion
6. Voices and Visions
The Internal Differentiation of Science
Introducing the Concept of the Master Narrative
The Ecology of Careers in Science
Lives in Science
Appendix A. Interview Questions
Appendix B. Postinterview Questions
Appendix C. Departmental Questions
Notes
References
Index