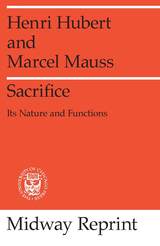 Marcel Mauss was the nephew and most distinguished pupil of Émile Durkheim, whose review L'Année sociologique he helped to found and edit. Henri Hubert was another member of the group of sociologists who developed under the influence of Durkheim.

The present book is one of the best-known essays pulbished in L'Année sociologique and has been regarded as a model for method and mode of interpretation. Its subject is at the very center of the comparative study of religion. The authors describe a basic sacrifice drawn from Indian sources and show what is fundamental and constant, comparing Indian and Hebrew practices in particular, then Greek and Roman, then additional practices from many eras and cultures.
TABLE OF CONTENTS