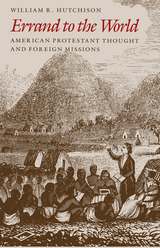 In this comprehensive history of American foreign-mission thought from the colonial period to the current era, William R. Hutchinson analyzes the varied and changing expressions of an American "sense of mission" that was more than religious in its implications. His account illuminates the dilemmas intrinsic to any venture in which one culture attempts to apply its ideals and technology to the supposed benefit of another.
AUTHOR BIOGRAPHY
William R. Hutchinson is Charles Warren Professor of the History of Religion in America at Harvard University. Among his many publications are The Transcendentalist Ministers: Church Reform in the New England Renaissance and Between the Times: The Travail of the Protestant Establishment in America, 1900-1960.
TABLE OF CONTENTS


List of Illustrations
Acknowledgments
Introduction: God's Mission and America's
1. "Civilizing": From Necessity to Virtue
Sources in Roman Catholic Missions
Protestants and the Indians
Against the Grain: The Quakers and Roger Williams
Missions and Millennium
2. New Nation, New Errand
Home Base and Foreign Footholds
Mission Apologetics
The Language of Spiritual Expansionism
Legacies
3. Christ, Not Culture
"Little Else Than Disappointment": Lessons from the American-Indian Missions
Hawaii and the Perils of Success
Rufus Anderson and the New Mission Policy
4. A Moral Equivalent for Imperialism
Thermidor: Resistance to the Anderson Policies
Protestant Liberalism and Missions
Religious Conservatism and Cultural Faith
Maintaining Consensus: The Watchword and Its Spokesmen
5. Activism under Fire
"Activism": The View from Europe
Fundamentalist Objections
6. Tradition under Fire
Vision and Revision
William E. Hocking: Re-Thinking Missions
Criticizing the Critics: The Battle over the Laymen's Report
7. Familiar Debates in an Unfamiliar World
The Ecumenical-Evangelical Standoff
A Church for Others: The Hoekendijk Prescription
Contesting Rights to the Heritage
Realignments and Second Thoughts
Afterword: Mission for a "People Among Peoples"
Bibliography
Index