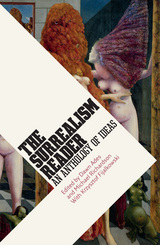 The Surrealism Reader: An Anthology of Ideas
edited by Dawn Ades, Michael Richardson and Krzysztof Fijalkowski
University of Chicago Press, 2016
Paper: 978-0-226-36996-9
One of the most influential cultural movements of the past century, surrealism has been extensively studied within the framework of its contributions to art and literature—but its pivotal role in the development of intellectual ideas, both political and philosophical, has yet to be fully explored. Featuring writings from the 1920s up to the late 1990s, this anthology—the first of its kind in English—finally reveals surrealism’s diverse scope, its deep contributions to the history of ideas, and its profound implications for contemporary thought.

Including essays by leading surrealists and other major writers on the movement, the volume addresses the key themes of identity, otherness, freedom and morality, and poetry. The texts uncover, among other things, the significance of surrealism for the antifascist and anticolonialist movements and the various manifestations of surrealism in the years after World War II. Giving space to the many different voices that made up the movement, and placing them for the first time within a clear and coherent historical framework, The Surrealism Reader radically revises the popular understanding of what, and when, surrealism was—making this book an essential reference for students, scholars, and all those interested in the central place of surrealism within twentieth-century thought and culture.
AUTHOR BIOGRAPHY
Dawn Ades is professor emerita at the University of Essex and former codirector of the Centre for the Study of Surrealism and its Legacies at the University of Manchester. Michael Richardson is a visiting fellow at Goldsmiths College, University of London. Krzysztof Fijalkowski is senior lecturer at Norwich University of the Arts.
TABLE OF CONTENTS


Introduction
Note on the Selection of Material

Part 1 The Annihilation of Self-Identity

Introduction
André Breton The Haunting
Pierre Mabille Preface in Praise of Popular Prejudices
René Crevel The Noble Mannequin Seeks and Finds her Skin
Paul Nougé The Light, the Shadow and the Prey
Pierre Mabille Mirrors
Marcel Mariën Non-Scientific Treatise on the Fourth Dimension
Michel Leiris The ‘Caput Mortuum’ or the Alchemist’s Wife
Leonora Carrington What Is a Woman?
Annie Le Brun Leave Everything
Vincent Bounoure Memory of the Last One
Bernard Caburet You Will Always Cherish your Failures, Machine-Man

Part 2 The Challenge of Otherness

Introduction
Louis Aragon It’s Up to You
Louis Aragon Note on Freedom
Marko Ristić Humour as a Moral Attitude
Nicolas Calas Love of Revolution in our Time
André Breton Liberty versus Liberation
Georges Bataille Reflections on the Executioner and the Victim
Gérard Legrand Is Surrealism a Philosophy?
Georges Henein Freedom as Nostalgia and as Project
Elisabeth Lenk The Hidden Being
Philippe Audoin Festival Mood
Pierre Mabille Paradise

Part 4 The Tasks of Art and Poetry