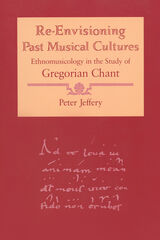 Studying Gregorian chant presents many problems to the researcher because its most important stages of development were not recorded in writing. From the sixth to the tenth century, this form of music existed only in song as medieval musicians relied on their memories and voices to pass each verse from one generation to the next.

Peter Jeffery offers an innovative new approach for understanding how these melodies were created, memorized, performed, and modified. Drawing on a variety of disciplines, including anthropology and ethnomusicology, he identifies characteristics of Gregorian chant that closely resemble other oral traditions in non-Western cultures and demonstrates ways music historians can take into account the social, cultural, and anthropological contexts of chant's development.
AUTHOR BIOGRAPHY
Peter Jeffery, a MacArthur Fellow, is professor of music at Princeton University.
TABLE OF CONTENTS


Acknowledgments
Introduction
1: The Problem
2: The New Historical View of Chant Transmission
A: The Theories of Treitler and Hucke
B: Oral and Written Transmission as Conceived in the New Historical View
3: Some Reflections on the New Historical View
A: The "Rules" of "Grammar" and "Rhetoric": Deciphering the "Language" of Formulaic Chant
B: Problems of Proof and Plausibility: The Need for Empirical Confirmation
C: Implications and Applications: Toward Methodologies for Melodic Criticism and Editing
D: Summary
4: Some Ethnomusicological Concerns
A: Some Terms
B: Cross-Cultural Comparisons
1: Principles of Comparison
2: Some Comparable Cultures
C: The Performers and Their World
D: Books and the Oral/Written Continuum
1: The Historical Continuum, from Oral to Written
2: Uses of Books in Liturgical Celebrations
3: Performance Practice
E: Cultural Contexts
1: Musical Contacts between Clergy and Laity
2: Liturgical and Quasi-Liturgical "Folk Songs"
3: Regional Chant Dialects
4: Art Music vs. Folk Song in the Liturgy
5: Some Possible Means of Oral Transmission in Liturgical Chant
A: Formulas
1: Repetition
2: Ranges of Variability
3: Concepts of "Formula" and "Centonization" in Selected Cultures
4: "Formulas" with Syntactic Functions
B: Melody Types, Melodic Models, and Tune Families
1: Melodic Groups and Types
2: Melodic Outlines and Contours
3: Kinds of Melodic Models: A Continuum
4: The Impact of Modal Theory
C: Interpolated Syllables
D: Melodic Embellishment
E: Organum
6: Summary and Conclusion
Works Cited
Index