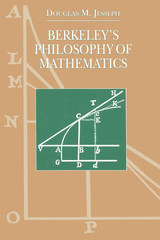 Jesseph begins with Berkeley's radical opposition to the received view of mathematics in the philosophy of the late seventeenth and early eighteenth centuries, when mathematics was considered a "science of abstractions." Since this view seriously conflicted with Berkeley's critique of abstract ideas, Jesseph contends that he was forced to come up with a nonabstract philosophy of mathematics. Jesseph examines Berkeley's unique treatments of geometry and arithmetic and his famous critique of the calculus in The Analyst.

By putting Berkeley's mathematical writings in the perspective of his larger philosophical project and examining their impact on eighteenth-century British mathematics, Jesseph makes a major contribution to philosophy and to the history and philosophy of science.


Preface
Works Frequently Cited
Introduction
1. Abstraction and the Berkeleyan Philosophy of Mathematics
Aristotelian and Scholastic Background
Seventeenth-Century Background
Berkeley's Case against Abstract Ideas
Sources of Berkeley's Antiabstractionism
2. Berkeley's New Foundations for Geometry
The Early View
Abstraction and Geometry in the Principles
Geometry in the New Theory of Vision
Geometry and Abstraction in the Later Works
3. Berkeley's New Foundations for Arithmetic
Geometry versus Arithmetic
Numbers as Creatures of the Mind
The Nonabstract Nature of Numbers
Berkeley's Arithmetical Formalism
Algebra as an Extension of Arithmetic
The Primacy of Practice over Theory
Berkeley's Formalism Evaluated
4. Berkeley and the Calculus: The Background
Classical Geometry and the Proof by Exhaustion
Infinitesimal Mathematics
The Method of Indivisibles
Leibniz and the Differential Calculus
The Newtonian Method of Fluxions
5. Berkeley and the Calculus: Writings before the Analyst
The Calculus in the Philosophical Commentaries
The Essay "Of Infinites"
The Principles and Other Works
6. Berkeley and the Calculus: The Analyst
The Object of the Calculus
The Principles and Demonstrations of the Calculus
The Compensation of Errors Thesis
Ghosts of Departed Quantities and Other Vain Abstractions
The Analyst Evaluated
7. The Aftermath of the Analyst
Berkeley's Disputes with Jurin and Walton
Other Reponses to Berkeley
The Significance of the Analyst
Conclusions
Bibliography
Index