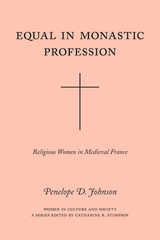 In this study of the manner in which medieval nuns lived, Penelope Johnson challenges facile stereotypes of nuns living passively under monastic rule, finding instead that collectively they were empowered by their communal privileges and status to think and act without many of the subordinate attitudes of secular women. In the words of one abbess comparing nuns with monks, they were "different as to their sex but equal in their monastic profession."

Johnson researched more than two dozen nunneries in northern France from the eleventh century through the thirteenth century, balancing a qualitative reading of medieval monastic documents with a quantitative analysis of a lengthy thirteenth-century visitation record which allows an important comparison of nuns and monks. A fascinating look at the world of medieval spirituality, this work enriches our understanding of women's role in premodern Europe and in church history.

Appendix A. The Twenty-six Female Monasteries Studied
Appendix B. List of Monasteries from the Register of Eudes Rigaud
Glossary
Selected Bibliography
Index