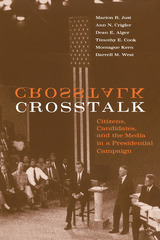 The most comprehensive portrait of a presidential campaign in more than a decade, Crosstalk focuses on the 1992 U.S. presidential race and looks at how citizens use information in the media to make their voting decisions and how politicians and the media interact to shape that information.

Examining political advertisements, news coverage, ad watches, and talk shows in Los Angeles, Boston, Winston-Salem, and Fargo/Moorhead, the authors chart the impact of different information environments on citizens and show how people developed images of candidates over the course of the campaign. Crosstalk presents persuasive evidence that campaigns do matter, that citizens are active participants in the campaign process, and their perceptions of a candidate's character is the central factor in the voting process.

This innovative study contributes significantly to our understanding of the 1992 presidential campaign and of campaigns in general, and shows how election campaigns can play an important role in the long-term vitality of democracy.
TABLE OF CONTENTS