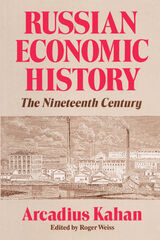 Upon the foundation of his unique experience and education, the late Arcadius Kahan (1920-1982) built a substantial body of scholarship on all aspects of the tsarist economy. Yet some of his important contribution might well have been dissipated were it not for this collection, since many of these essays were often available only in isolated, obscure sources. This posthumous volume makes readily available for the first time ten of Kahan's essays, nine previously published in English and one in German, which serve to integrate his carefully developed picture of nineteenth-century Russian economic history. Kahan's remarkable vision forms a complement to the thought of Gerschenkron, and this volume is certain to become a valuable source for scholars and students of Russian and European economic and social history.
TABLE OF CONTENTS


Preface
Introduction
1. The Russian Economy, 1860-1913
2. Government Policies and the Industrialization of Russia
3. The Tsar "Hunger" in the Land of the Tsars
Bibliography
4. Notes on Serfdom in Western and Eastern Europe
5. Forms of Social Protest by the Agrarian Population in Russia
6. Social Structure, Public Policy, and the Development of Education
7. "Hereditary Workers" Hypothesis and the Development of a Factory Labor Force in Eighteenth- and Nineteenth- Century Russia
8. Determinants of the Incidence of Literacy in Rural Nineteenth-Century Russia
9. Russian Scholars and Statesmen on Education as an Investment
10. Data for the Study of Russian History
Bibliography
Notes
Index