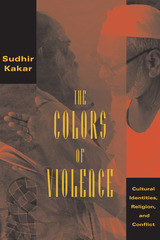 For decades India has been intermittently tormented by brutal outbursts of religious violence, thrusting thousands of ordinary Hindus and Muslims into bloody conflict. In this provocative work, psychoanalyst Sudhir Kakar exposes the psychological roots of Hindu-Muslim violence and examines with grace and intensity the subjective experience of religious hatred in his native land.

With honesty, insight, and unsparing self-reflection, Kakar confronts the profoundly enigmatic relations that link individual egos to cultural moralities and religious violence. His innovative psychological approach offers a framework for understanding the kind of ethnic-religious conflict that has so vexed social scientists in India and throughout the world.

Through riveting case studies, Kakar explores cultural stereotypes, religious antagonisms, ethnocentric histories, and episodic violence to trace the development of both Hindu and Muslim psyches. He argues that in early childhood the social identity of every Indian is grounded in traditional religious identifications and communalism. Together these bring about deep-set psychological anxieties and animosities toward the other. For Hindus and Muslims alike, violence becomes morally acceptable when communally and religiously sanctioned. As the changing pressures of modernization and secularism in a multicultural society grate at this entrenched communalism, and as each group vies for power, ethnic-religious conflicts ignite. The Colors of Violence speaks with eloquence and urgency to anyone concerned with the postmodern clash of religious and cultural identities.
TABLE OF CONTENTS


Preface
Acknowledgments
1. The Setting
Shifting Perspectives
The City: "Unparalleled in the World"
Hindus and Muslims: Versions of the Past
Between Enemy Lines
2. The Riot
The Story of a Cousin Told by His Elder Brother
The Cousin from Lahore
Territory and Passion
Profile of a Riot
Hyderabad: December 1990
3. The Warriors
Testing the Tigers
The Violent Poet
Young Tigers and Pussy Cats
Spreading the Wind
Psyche and Wrestling
4. Victims and Others I: The Hindus
A Pardi Family
Pardis and the Modern World
The Night of Long Knives
Pardis and Muslims: The Past
Image of the Muslim
Gandi, Psychoanalysts, and Cows
Children's Tales
5. Victims and Others II: The Muslims
Rashid's Family
Days and Nights of the Riot
Barbar's Children
The Victim Response
Morality of Violence
Morality and the Hindus
6. A New Hindu Identity
Shadows of Mourning
Secred Wounds
Cultural Identity and Cure
Psychology versus Politics?
Search for Hindu-ness
The Virtuous Virago
7. The Muslim Fundamentalist Identity
Meeting the Mullahs
Religious Politics
8. Conclusion: Religious Conflict in the Modern World
Religious Identities and Violence
Histories and Futures
Appendixes
1. The Giessen Test
2. The Morality Interview
Notes
Index