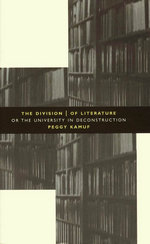 Where does the university begin and the "outside" end? How has literature become established as a separate domain within the university? Demonstrating that these questions of division are intricately related, Peggy Kamuf explores the space that the university devotes to the study of literature.

Kamuf begins by analyzing the complex history of literary study within the modern university, critically reading developments from the French Revolution through the nineteenth century and beyond in Europe. She then turns to one of the most troubling works in the American literary canon—Melville's The Confidence-Man—to show how academic literary history has avoided confronting the implications of works in which meaning is never solely confined within a past. By engaging a future readership to which it applies for credit, Kamuf argues, literature cannot serve as a stable object of study. It locates, rather, a site of "the university in deconstruction."

Ranging from disciplinary histories of literature to our current culture wars, Kamuf offers a fascinating critique of academic literary study.
TABLE OF CONTENTS


Acknowledgments
Introduction: Catachresis and Institution
1: The University Founders
2: The Rhetoric of Ruin
3: The Walls of Science
4: Peguy and the Event of History
5: The University in Deconstruction
Prologue: The Impasse of Literary History
Prologue: Melville's Credit Card
Epilogue: A Future for It
Notes
Index