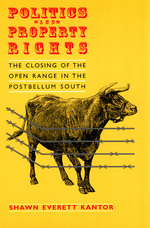 After the American Civil War, agricultural reformers in the South called for an end to unrestricted grazing of livestock on unfenced land. They advocated the stock law, which required livestock owners to fence in their animals, arguing that the existing system (in which farmers built protective fences around crops) was outdated and inhibited economic growth. The reformers steadily won their battles, and by the end of the century the range was on the way to being closed.

In this original study, Kantor uses economic analysis to show that, contrary to traditional historical interpretation, this conflict was centered on anticipated benefits from fencing livestock rather than on class, cultural, or ideological differences. Kantor proves that the stock law brought economic benefits; at the same time, he analyzes why the law's adoption was hindered in many areas where it would have increased wealth. This argument illuminates the dynamics of real-world institutional change, where transactions are often costly and where some inefficient institutions persist while others give way to economic growth.
TABLE OF CONTENTS


Acknowledgments
1: The Dynamics of Institutional Change: An Analytical Framework
2: The Economic Benefits of Livestock Enclosure
3: Translating Economic Interest into Action: Distributional Conflicts and the Dynamics of Institutional Change
4: Resolving the Distributional Conflicts
5: The Politics of Property Rights
6: Uncovering the Ideology of Property Rights Reform in the Postbellum South
7: Property Rights and Populists: The Political Consequences of Livestock Enclosure
Epilogue: A Note on Institutional Change, Efficiency, and Democracy
App. A: Procedure Used to Calculate Expected Savings from the Stock Law
App. B: Data Appendix to Carroll and Jackson County Election Regressions
Notes
References
Index