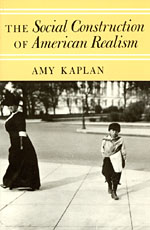 Kaplan redefines American realism as a genre more engaged with a society in flux than with one merely reflective of the status quo. She reads realistic narrative as a symbolic act of imagining and controlling the social upheavals of early modern capitalism, particularly class conflict and the development of mass culture. Brilliant analyses of works by Howells, Wharton, and Dreiser illuminate the narrative process by which realism constructs a social world of conflict and change.

"[Kaplan] offers some enthralling readings of major novels by Howells, Wharton, and Dreiser. It is a book which should be read by anyone interested in the American novel."—Tony Tanner, Modern Language Review

"Kaplan has made an important contribution to our understanding of American realism. This is a book that deserves wide attention."—June Howard, American Literature
TABLE OF CONTENTS


Acknowledgments
Introduction: Realism and "Absent Things in American Life"
1. The Mass-mediated Realism of William Dean Howells
2. The Unreal City in A Hazard of New Fortunes
3. Edith Wharton's Profession of Authorship
4. Crowded Spaces in The House of Mirth
5. Theodore Dreiser's Promotion of Authorship
6. The Sentimental Revolt of Sister Carrie
Notes
Index