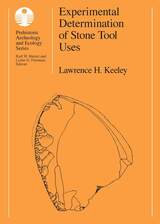 A major problem confronting archeologists is how to determine the function of ancient stone tools. In this important work, Lawrence H. Keeley reports on his own highly successful course of research into the uses of British Paleolithic flint implements. His principal method of investigation, known as "microwear analysis," was the microscopic examination of traces of use left on flint implements in the form of polishes, striations, and breakage patterns.

The most important discovery arising from Keeley's research was that, at magnifications of 100x to 400x, there was a high correlation between the detailed appearance of microwear polishes formed on tool edges and the general category of material worked by that edge. For example, different and distinctive types of microwear polish were formed during use on wood, bone, hide, meat, and soft plant material. These correlations between microwear polish and worked material were independent of the method of use (cutting, sawing, scraping, and so on). In combining evidence of polish type with other traces of use, Keeley was able to make precise reconstructions of tool functions. This book includes the results of a "blind test" of Keeley's functional interpretations which revealed remarkable agreement between the actual and inferred use of the tools tested.

Keeley applied his method of microwear analysis to artifacts from three excavation sites in Britain—Clacton-on-the-sea, Swanscombe, and Hoxne. His research suggests new hypotheses concerning such Paleolithic problems as inter-assemblage variability, the function of Acheulean hand axes, sidescrapers, and chopper-cores and points the way to future research in Stone Age studies.
AUTHOR BIOGRAPHY
Lawrence H. Keeley is professor of anthropology at the University of Illinois at Chicago Circle.
TABLE OF CONTENTS