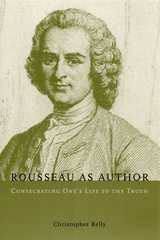 For Rousseau, "consecrating one's life to the truth" (his personal credo) meant publicly taking responsibility for what one publishes and only publishing what would be of public benefit. Christopher Kelly argues that this commitment is central to understanding the relationship between Rousseau's writings and his political philosophy.
Unlike many other writers of his day, Rousseau refused to publish anonymously, even though he risked persecution for his writings. But Rousseau felt that authors must be self-restrained, as well as bold, and must carefully consider the potential political effects of what they might publish: sometimes seeking the good conflicts with writing the truth. Kelly shows how this understanding of public authorship played a crucial role in Rousseau's conception—and practice—of citizenship and political action.

Rousseau as Author will be a groundbreaking book not just for Rousseau scholars, but for anyone studying Enlightenment ideas about authorship and responsibility.
AUTHOR BIOGRAPHY
Christopher Kelly is a professor of political science at Boston College. He is the author of Rousseau's Exemplary Life and coeditor of The Collected Writings of Rousseau.
TABLE OF CONTENTS

CHAPTER ONE
Responsible and Irresponsible Authors

CHAPTER TWO
The Case for (and against) Censorship

CHAPTER THREE
The Case for (and against) Art

Postscript: Philosophers and the Friend of the Truth