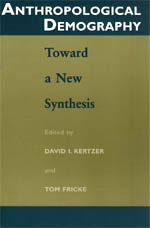 Although in its early years anthropology often used demographic research and showed interest in demographic issues, anthropology and demography have more recently grown to distrust each other's guiding assumptions and methods. Demographers have stressed universal causal models and standardized survey methods, while sociocultural anthropologists have increasingly focused on the uniqueness of different peoples and their cultures.

Showing that the two disciplines have much to offer each other, this book bridges the demography/anthropology divide. The editors begin the volume with an in-depth historical account of the relations between the fields. Eminent contributors from both disciplines then examine the major issues and controversies in anthropological demography, including the demographic implications of differing family and kinship systems; the influence of new developments in cultural, gender, and identity theory on population study; the limits of quantitative approaches in demographic study; and demographers' views of the limits of anthropological methods.
TABLE OF CONTENTS